Lately, John Templeman and I have been knocking out some serious multi-player action on the Playstation 3. Uncharted 2, and Resident Evil 5 have been very fulfilling games from a co-operative viewpoint. The PC finally drew me back in though. Starcraft II, Left for Dead, Age of Empires II and some other titles have lead me to do some housecleaning on my computer setup. The first thing that I decided had to go was my tiny (by comparison) 19″ Acer VGA monitor. It looks like a joke next to my wife’s beautiful 24″ ASUS HDMI monitor. Now I have a brand new ASUS MS236H monitor (shown here). Next to go was my broken, six year old installation of Windows XP. Seriously, I have kept the same install running through countless infections, blue screens, hardware upgrades, service packs – the works! Enough was enough, and after my generational jump over Windows Vista, I landed on Windows 7.

I had 7 running on the wife’s machine for a while, and despite it being reloaded a few times (what can you expect, its still Windows), I have been fairly impressed with it. Kristin  is a good litmus test of the stability of a piece of software. I installed it on my machine and ran into a bunch of problems I didn’t anticipate. Apparently my Sound Blaster Live! 5.1 sound card had an EOL around 1998, so no official drivers. I am surprised that Windows didn’t “just work” with this given its age, and its established user base (perhaps I am the last hold out?) After installing some random driver from some guy named Peter in a forum talking about the problem (and advising me not to use his driver with more than 2GB of RAM if I valued uptime) I got the sound working.

Next came the printer. Holy hell. The same driver package (the EXACT same) package I installed on my wife’s computer that just worked kept failing to install the printer driver for our Dell 1600n. After several reboots, and the day turning into ‘morrow, I finally settled on installing the HP Laserjet 4100 drivers.They seem to be mostly inter-changable, so I guess I have solved that problem too.

Another biggy was the unresponsiveness of web browsers on the OS (IE being the exception, where it is always slow). I was experiencing page load times so long, they were timing out while waiting for a connection. I thought it was Comcast, but after some Googling, I found that the “Automatic Proxy Discovery” setting was turning my inbound pipe into dial up.

The weather here has really started to cool down, with high’s in the 60’s. It should be perfect weather to walk to the train station without breaking a sweat while getting some nice exercise, but I just haven’t been in the mood. Its probably due to the soul-crushing amount of work that I have to do to keep on top of my classes. If textbooks had any competition of reader’s choice, the author’s might have to actually invest time into things that make a book worth reading, such as clarity and interestingness. The days of sailing in the Charles River with Hoydis are waning, and the days where I have to strap my feet into a snowboard are soon approaching. 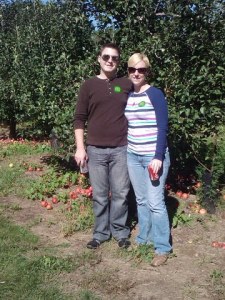 Our Thanksgiving vacation plans are questionable at best right now, so who knows when I will be back in Atlanta. We are making the best of our situation here regardless. Kristin and I have decided to throw a Halloween party for anyone who is interested in joining us. It will be a costume, pot-luck, beer-fest, and should be a great way to bring in the holiday. Zoo keepers, it turns out have some of the most interesting stories, and they will be in attendance so I have been told. We haven’t gotten to show our house, and all its critters off to many folks yet, so here is your chance to see how people outside of the city live. All are invited – and bring a friend!

The wife is still job searching after the crater that Capron Park management left on her career path. She has applied here and there and we are eagerly awaiting any leads. In the meantime, we have been enjoying the atypical time we get to spend together on the weekends. Last week, we went to Conner’s Farm and did our first Maize Maze. It was a-mazing. So corny… Ok, I’ll stop now. Thanks to Michael Hoydis for the invite – we had fun. The picture here is one that Michael and Hannah snapped while we were walking in the Apple Orchards. That green sticker on our shirts means we successfully navigated Clint Eastwood’s face. Seriously.

Tomorrow is Friday, and I have a three day weekend. Lets hope I can convince some of my co-workers to break away from programming for a few minutes and go grab some drinks…if I make it that far.

Hope everyone, and all of their new children are doing well! Hopefully we will see everyone soon back on the flip side.

Update: A picture of the monitor in its new home: