It has been a trying last few weeks, but I have finally rolled out the new SWAN Manager. It ended up being almost a total rewrite, and I walked away with a lesson learned:

I have highlighted a few of the more significant changes in screenshots below:

I based the new login screen off of Google Docs login. It shows at a glance what services are offered inside the Manager, and is a little more friendly than just a login box. Also, you can see the new tabbed interface at the top.

The User model underwent the most significant of changes. First, I decided that it was running way to slow, so I reimplemented the way it looks up the data from an indirect (and unreliable) method, to querying the sources directly. Also, the data is cached using memcached for even more speed enhancements.

An area I am particularly proud of is the display of the icons the user should see. I take each role name, and do a Net::HTTP fetch on them, checking for a 200 result, and displaying it. This is all handled in a helper.

The channel model underwent significant changes as well. It has always directly queried for the data on each request, instead of caching the results. In addition to caching and other performance tweaking – I now know a lot more about the channels themselves. The entire model operates as an “acts_as_tree” with parent, and children nodes to show the sections, and sub-sections of a channel. If you can edit a section, it shows up as a link.

The announcements controller has been completely reworked as well. Before the user didn’t have the ability to do things like send to a role, or choose delivery / expiration times, or a destination. Now the user gets to pick all of this (Population Selection with a parameter is shown). A message can be sent with just a few clicks. The announcement model uses “acts_as_state_machine“, a seemingly dead but very useful plugin. The announcement goes through several states with validation checking and routing automatically handled. I have to thank Matt for turning me onto the idea. 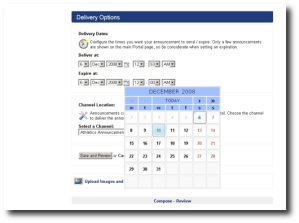 Here I have an image of the announcement wizard further down on the same page as the image above. The date selected is handled by a Rails plugin called “unobtrusive_date_picker“. It allows some cool tricks like keyboard arrow navigation, and the ability to define starting / ending date ranges, and minute increments in the select box.

Additionally, once the announcement is sent, rather than going to get a cup of coffee while it runs the process (sometimes 10+ minutes), it now backgrounds it in a separate rake task.

All in all, I think that this is a word of difference from the previous SWAN Manager. This is stable, fast , and easy enough now that I feel it is something the campus as a whole can use without concern.Â  And it will need to live up to it expectations as well, as we have a few departments already lined up to start using its functionality as soon as we give the green light.

After I pat myself on the back, I suppose its time to get back to working on all those pesky channels…