With four months of development left, Ubuntu’s blueprints are starting to accurately reflect what we can expect in the next release. Unlike every other distribution of Linux out there, Ubuntu looks to be introducing some real changes (the kind that require sweat and blood). The most interesting to note is that with the inclusion of X.org 7.3, the infamous “/etc/X11/xorg.conf” file will be obsolete. Instead, DisplayConfigGtk will be the primary means of configuring your computer’s display. It is about time I get to click instead of type when changing my screen resolution! A screenshot of this utility is seen below: 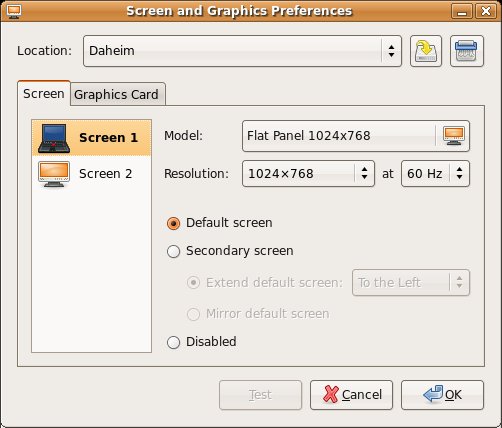 Coupled with this is the ongoing “bulletproof-x” spec, that will allow for graceful degradation of video settings until a solution that works is found. This really fell short on my notebook, when I installed Ubuntu 7.04. Now with the restricted-driver manager, setting up video looks to be even sexier with compositing via Compiz Fusion enabled by default.

I was hoping for a little more in this release, but a few things done right are better than a lot of things done poorly. I’ll let you know in October how it runs on my laptop. Then maybe Subversion won’t be the bane of my existence…